The ultimate goal of FG2 is to provide the rationale for the development of novel therapeutic targets and prevention strategies. Common diseases, such as cardiovascular diseases and cancer, are caused by a combination of multiple genetic and environmental factors. Understanding the molecular bases of the disease and how genetic factors interact would allow better prevention, diagnosis and treatment of the disease itself. The scientific interests of the Functional Genomics and Genetics Laboratory (FG2) are focused on the identification and functional characterization of mutations as well as other regulatory factors that may be involved in the onset and progression of the disease. 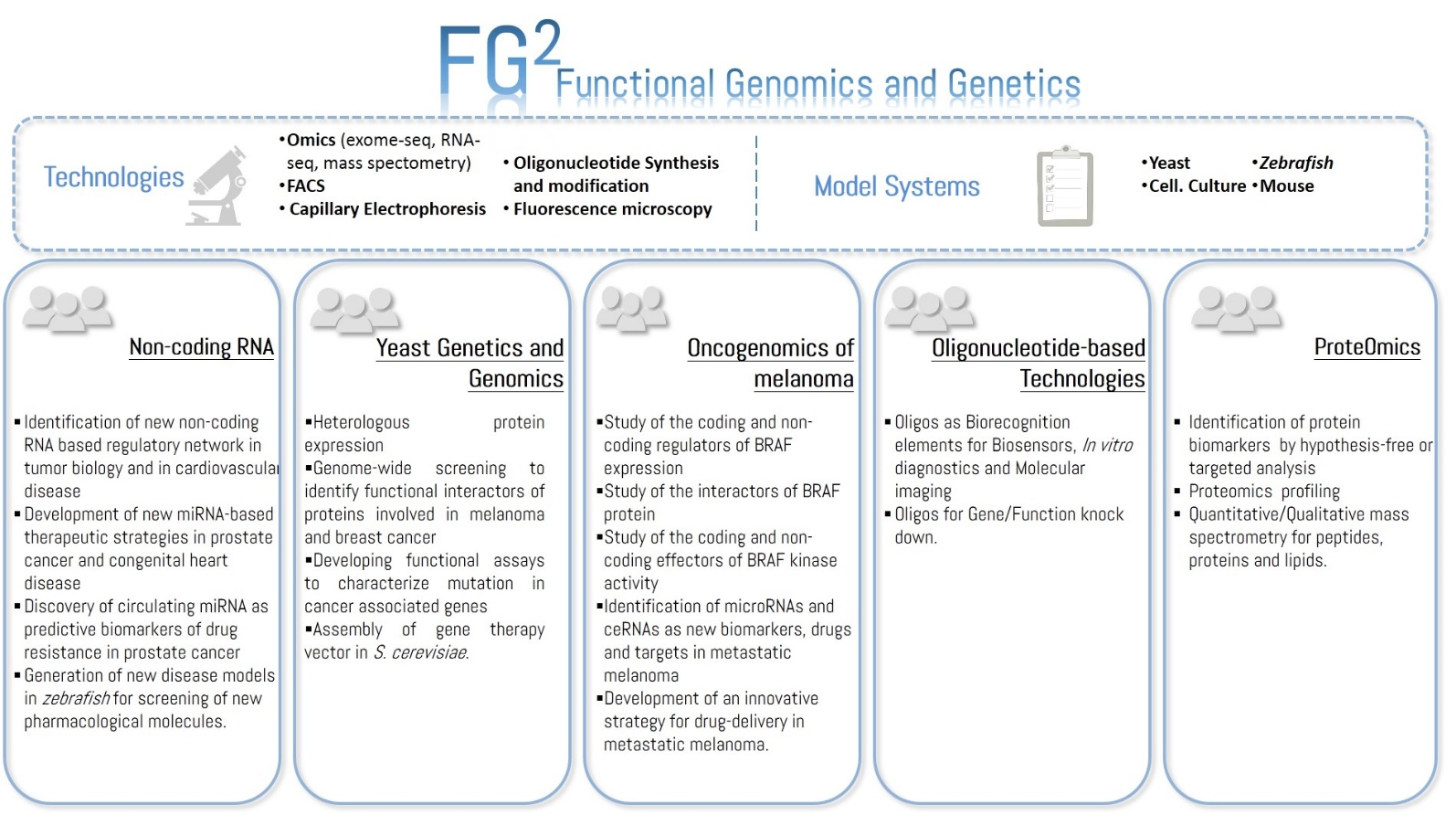 The lab uses the zebrafish model to identify genes and mechanisms that regulate normal heart development and function, with particular attention on microRNA (miRNA) mediated cardiac regulatory mechanisms. Zebrafish has several advantages over classical vertebrate models, which include high genetic and organ system homology to humans, high fecundity, external fertilization and ease of genetic manipulation. Comparing miRNA profiling of normal and pathological hearts, miRNAs deregulated in the pathological condition and their targets are identified. Gain and loss of function studies in vivo and in vitro are used to elucidate the functions of these genes and evaluate their potentiality as new therapeutic targets.

By stable alteration of these genes in zebrafish, new disease models are generated where the screening of large number of new pharmacological molecules can be easily performed.

In the oncological area, the association between the alteration of gene expression regulation by non-coding RNAs and cancer development/progression is now well documented.

The group is currently studying the role of tumor suppressor microRNAs (TS-miRNAs) in prostate cancer (PCa) biology by altering the TS-miRNAs expression in PCa in vitro models. To build the gene network affected by TS-miRNAs regulation is utilized high throughput miRNA-target capture techniques in combination with next generation sequencing (NGS) technology for targets identification (targetOME).

The use of circulating miRNAs as predictive biomarker in PCa is under study. In particular, is generated an in vitro model of docetaxel (DCT) resistance, a drug generally used when PCa patients became resistant to anti-androgen therapy, in order to identify extracellular miRNAs that are putative predictors of DCT resistance and that are tested as circulating biomarkers using the blood of PCa patients undergoing DCT therapy.

The S.cerevisiae, a unicellular eukaryotic organism, is used as a genetic model system, inexpensive, easy to manipulate and rapid to culture, to identify interactors of proteins involved in human diseases and to develop tools for the classification of human gene mutations and for disease treatment.

The lines of research are:

The research activities of this research group, the result of a synergy among the Core Research Laboratory of Istituto per lo Studio, la Prevenzione e la Rete Oncologica (ISPRO) and CNR-IFC, are focused on the study of melanoma, the most aggressive form of skin cancer.

The group aims at achieving a deeper understanding of the biology of BRAF, an oncogene that is frequently mutated in melanoma and represents a very powerful cancer driver. The group is currently studying the coding and non-coding regulators of BRAF expression (with particular emphasis on microRNAs and ceRNAs, which act at the post-transcriptional level); the interactors of BRAF protein; and the coding and non-coding effectors of BRAF kinase activity.

The model systems exploited are both in vitro (melanoma cell lines, yeast S. cerevisiae) and in vivo (genetically engineered zebrafish; immunocompromised and genetically engineered mice). The ultimate goal of the group is to identify new drugs / drug targets that can be combined with and improve the efficacy of BRAF inhibitors.

The group is also interested in the identification and characterization of microRNAs that can serve as predictive biomarkers of response and resistance of melanoma patients to targeted and immunotherapy.

Finally, the in vivo testing of an innovative strategy that allows the selective delivery of drugs (chemical compounds as well as nucleic acids) into melanoma cells is under study.

Oligonucleotides (short, synthetic strands of standard or modified DNA or RNA) are one of the most important tools in modern day molecular biology and biotechnologies. In facts “Oligos” can be used as probes to recognize and bind complementary nucleic acids strands or other “fitting” biomolecules and/or as a tool for artificial gene knockdown and gene regulation. Conjugation of biomolecules (proteins, peptides, nucleic acids) with drugs, fluorophores or other “labels”, nanoparticles or the solid surface of sensing devices is another key point in biotechnologies, enabling detection, imaging and therapeutic effects.

The main activities of the Oligo-Bioconjugation Lab are related to design, synthesis and purification of oligonucleotides for the specific inhibition of cell functions by the interaction with RNA (siRNA, ribozymes, antisense) or with proteins (decoys, aptamers). The lab is involved also in aptamer development by in vitro evolution from a randomized oligonucleotide population and in the immobilization/conjugation and labelling of biomolecules for molecular imaging/targeting.

There is also an expertise in derivatization of metal or silicon surfaces with organic films and the preparation of functional protein/oligo layers for biosensors. The “technological” support of the lab is represented by instruments for oligonucleotide synthesis (DNA/RNA synthesizer), oligo and bioconjugates purification (HPLC and other chromatographic techniques), and analysis (Capillary Electrophoresis), which, coupled with the chemical expertise, is available for different applications and open to collaborations.

POL’s focus is the translational research and, in particular, the application of proteomics/mass spectrometry technologies and cellular/molecular biology approaches to clinical issues in order to gain new insights into the mechanisms involved in the onset and progression of pathologies, to identify putative prognostic and diagnostic biomarkers (biomarker discovery) as well as to define and assess molecular targets for therapeutic intervention (functional proteomics).The group has been committed in understanding the molecular bases of cardiovascular, metabolic, oncological and genetic/congenital diseases with the aid of cell and tissue models.
In particular: